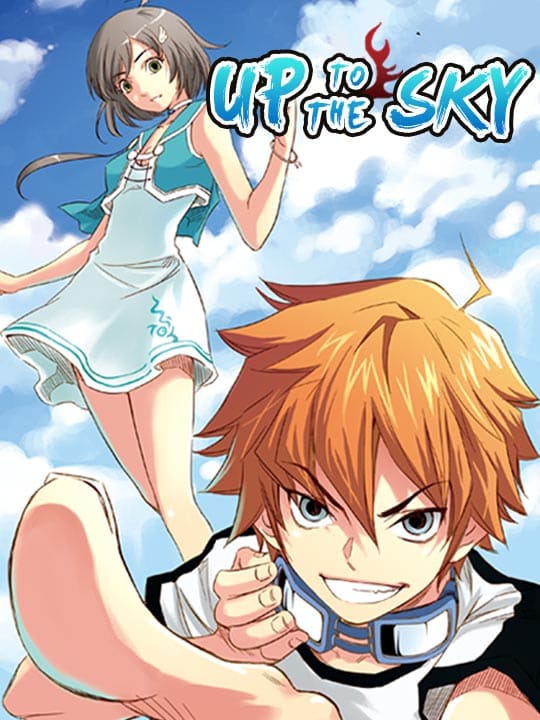 Up To The Sky

What our protagonist Neil enjoys doing everyday is loudly preaching what his father had seen above the Cloud Sea. Nobody believed that it was true, and all say that his father was a liar who deceives the public to gain fame. In order to prove that his father wasn't lying, Neil resolved to break through the obstruction of the Cloud Sea and find out the truth! On his journey, he discovered that the Cloud Sea's existence was actually huge conspiracy devised by Genians, and his companion seemed to be a friend, but also an enemy... 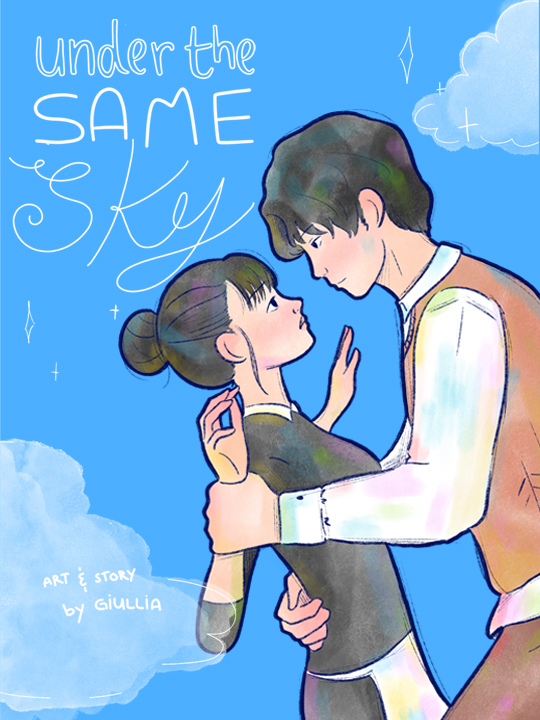 Under the same sky

Yoshida Asuka is a young girl who pursues the dream of becoming a painter. In order to do it, however, she is forced to do three part-time jobs until she ends up working as a maid for a rich family and an old acquaintance of her, the heir of the family, Yamamoto Haru, who attends the faculty of architecture on the same university campus. 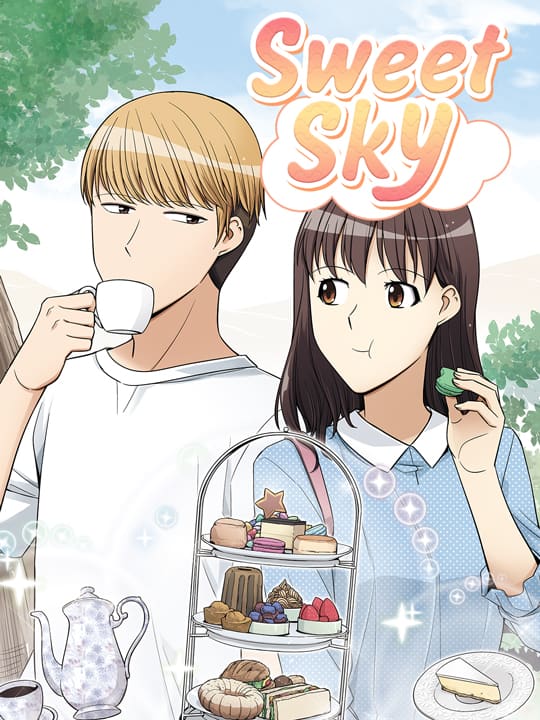 Jin Sky, a low-level angel who erases people's painful memories, And the story of Dandelion, a college senior who recalled her first love by Jin Sky 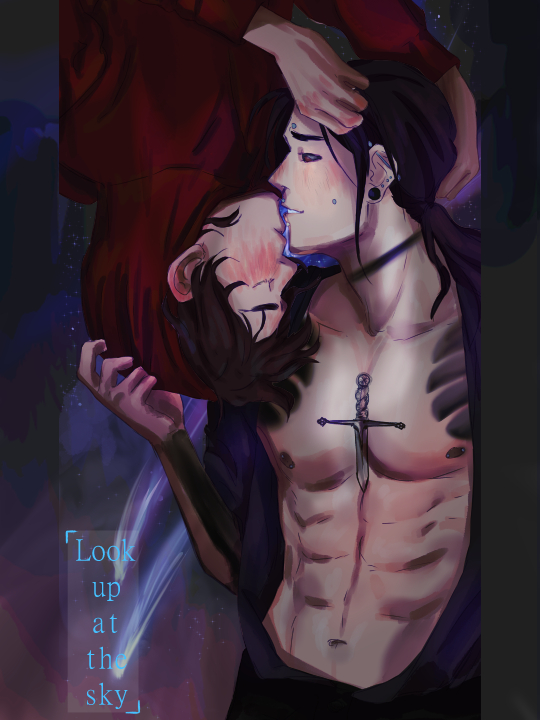 Look up at the sky

Markus is an insecure guy with low self steem caused by bad experiences in his life. But things start to change after he decides to get out of his confort zone and go out with this weird but kind guy he met on public transportation. 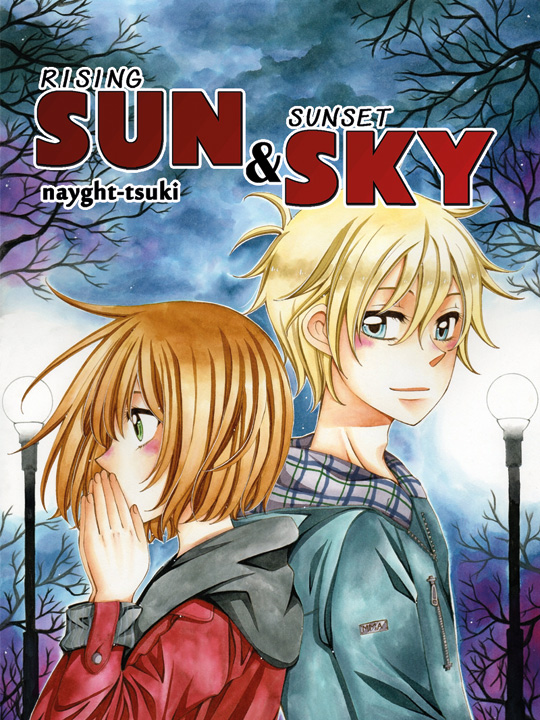 Isa's father and Elias' mother are suddenly moving in together. Although both teens are not excited about the news, Isa tries to make the best of the situation. Elias just needs to take his part in this, too... (please read from right to left!) SKY is a manga composed of only four chapters about the relationship between man and sky. Jih-Ro is destined to become the conqueror of the land, but there is one problem—another man shares his fate. This other man will become the conqueror as a result of Jih-Ro’s death unless he can be found and stopped. A search must commence, one that will ultimately become a hunt, but Jih-Ro’s expedition will not be a lonely one. He stumbles upon a man called Il-Geum, who joins the future conqueror in his quest. Their meeting will prove to be more than a coincidence, though, as it becomes clear that Il-Geum is quite possibly the man Jih-Ro has sought. Together, the two begin a new journey and a new rivalry. As the stakes are heightened through kidnappings, deceit and magic, trust becomes a distant memory, and the two begin a feud that could ultimately lead to death, or worse… (Source: ADV). In the near future, Earth is at war with aliens called Worms. The war leaves the population of Earth decimated, with young men the main casualties. The Worms were beaten back but their re-emergence heralds the creation of a mecha unit called the Sonic Divers, piloted by 3 young girls to counter this threat. (Source: ANN) Hanza Ryunosuke, nicknamed the Blood Dragon, has always been a street fighter. His short temper has him picking fights with anyone and, to top it all off, he has never lost. Now that he's attending Mikado High School, he wants to change his ways and fall in love with a girl. However, he finds it hard to escape from his reputation and none of his classmates want to associate themselves with him. Then one day, he meets someone significantly stronger than him and, to his surprise, it is a beautiful girl named Fujiki Honami from the Karate Club. Hanza falls instantly in love with her. To his dismay, Fujiki hates Hanza because he uses his strength for violence. In order to prove himself to her and to become stronger, Hanza joins the Karate Club. No one believes he can become good, but they don't know how much perseverance and dedication Hanza truly has. (Source: MangaHelpers) Sky World takes place in the eponymous world of the MMORPG, Sky World. One day, thousands of players woke up to find themselves in the world. Junichirou Mikimori is one of these players who has now come to live in Sky World. The story begins with Junichirou on Altaria Island. There, he encounters an all-female guild and befriends two of its members. Together, they decide to leave Altaria Island and journey to the highest point of the world: Aion Island, in hopes of being able to find a way back to the real world. (Source: NanoDesu) On the first day of school, university student, Ban Ritsuki, felt disgusted when a man who bumped into him told Ritsuki that he has the "type of face he likes." However, that man was actually the lecturer, Takagi Shoutarou who, somehow after that day, kept clinging on to Ritsuki. Ritsuki gets more and more pissed off, until one day, he saw Takagi's miserable expression while gazing up into the sky. Suddenly, he starts to care for Takagi… (Source: Bliss) Gangnam in complete darkness… "Am I the only one alive? What’s going on?..." A boy wakes up to find himself in a building full of dead people. No cars, no electricity and no stars in the sky… Not only Gangnam, but the entire city seems deserted. (Source: LINE Webtoon) Kazama's family died in a mysterious explosion when he was still young and since then, he has not been able to come to terms with their deaths or even with himself. He emotionally distances himself from everyone and his aggressive nature gets him the nickname "Real Life Combat Game Character." Years later, Kazama, now in high school, gets close to death after a car accident. As he accepts his fate, Sky Blue enters his consciousness. Somehow related to the multicolored meteors that were seen all around the world on the same day of Kazama's near-fatal accident, Sky Blue is able to control his body. The teenage-looking Sky Blue is able to control Kazama's body movements and even his speech. He falls for the beautiful but cold Haioka Anna and when she gets kidnapped, Sky Blue takes over Kazama's body, unleashing enormous amounts of power and strength. (Source: MU) The story follows Shirou, a wingless boy who lives in the world of the angels, however that won't stop him from aiming to be an archangel which are warriors who purify the villainous demons. (Source: Batoto) A young woman gazes wistfully off of her balcony, gazing at the beautiful view. She enjoys drinking beer on her days off, and has noticed someone growing flowers in an empty space on the first floor. One day, she receives mail that does not belong to her; and after happening a second time, she returns it to its owner. And that's when she meets a special man... (Source: MU) This is a crossover of Key series: Kanon and AIR. Each chapter is a seperate mini-story from the two series.

Menou Aoi pledged to be a great stewardess (or cabin attendant?) after Hanzo—her childhood love interest—said an ugly-looking girl cannot be a stewardess. She realized that pledge, but instead of being praised as great, she is often labeled as clumsy. She serves the Tokyo - New York leg with other 10 male cabin attendants who are good looking from head to toe. One of them, James, suspiciously has a face like Hanzo. (Source: M-U) Motochika Narasaki comes from a large, noisy family, and his two little brothers make it nearly impossible for him to have any alone time. When his need for peace and quiet coincides with his teacher arm-twisting him into minding the school library in the evenings, he hesitantly accepts. What he does not expect, though, is running into the infamous delinquent, Natsuki Terashima, who has been roped into taking care of the library as well. Initially Narasaki is convinced that he could never get along with someone like Terashima; however, as he spends evening after calm evening reading with the other boy, Narasaki is forced to change his opinion, and the odd pair gradually become closer. But this arrangement will only last till the summer vacation, and Narasaki must soon figure out what this time, and the person he spends it with, mean to him. [Written by MAL Rewrite] In the world where a war has become a show business, "Killdre"—pilots free from aging and remaining to be adolescent—fight and die in the battle skies. Kannami Yuuhich, an ace "Killdre" pilot assigned to an air base close to the front line and he met a female "Killdre" officer Kusanagi Suito. During routine lives filled with deaths and killings, the relationship between the two "Killdre" started to change in an enigmatic way...

On a cold day, Mirita finds discovers a hidden room with a kotatsu (a table that keeps one warm) inside. The kotatsu belongs to two of the most popular and handsome twin brothers in school. Both immediately kick Mirita out. However, Mirita becomes even more determined to get back into that room. What love triangle will commence? [Source: Esthétique] Confession Under a Clear Sky

From MU A short story collection of 5 stories. Story 1: Confession Under a Clear Sky Fuuko has always had a crush on her childhood friend, Manabu, but all of a sudden, he starts acting cold towards her. Insecurity arises as her best friend, Itt-chan, confides in her about her crush on Manabu. Itt-chan is pretty and mature and with Manabu drifting further and further apart from her, Fuuko is worried that she may lose Manabu forever. Story 2: Half of a Romance Ever since an incident on a train, Kanade has been in love with her senpai, Takashi. However, Takashi is a popular, playboy kind of guy who doesn't take relationships seriously. He befriends Kanade and enjoys being around her for her innocent and child-like behaviour. Yet he realizes that he is not suitable for her and tells to forget about him. Will Kanade's feelings be able to reach him? Story 3: The Girl of the Full Moon There exists a legend about a beautiful girl from the moon, who feeds on human blood. Natsume believes in this legend and thinks that his classmate Nanae resembles her. What happens one night when Natsume gets into an accident? Story 4: A Smile Full of Feeling Story 5: Heading Towards Tomorrow! Tenmasou is an inn for souls whose bodies are between life and death. They rest there a while, before either continuing on or returning to the world. A woman named Izuko brings the souls of the customers to Tenmasou's peaceful doors. The inn is run by a mother and her two daughters, Nozomi and Kanae. Nozomi and Kanae are soon joined by a third half-sister, Tamae, who is the child of their father and another woman. Tamae is a 17-year-old girl who has had a difficult life, and whose body now lies in a hospital after an accident, though she doesn't realize her situation. She cheerfully helps out her sisters in the inn, but Nozomi and Kanae's mother is reluctant to accept her. The three sisters work together to help heal the souls of those that come to them. (Source: MangaHelpers) The manga adaptation of the Baldr Sky Dive1.