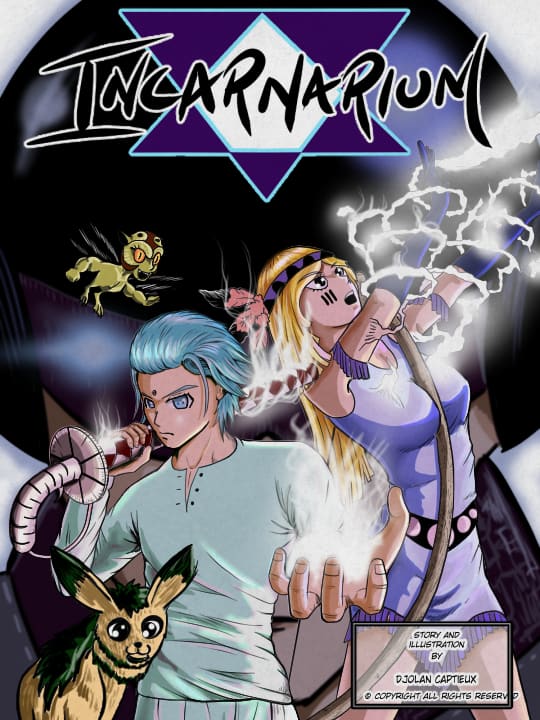 The Incarnarium is the system which facilitates the transfer of souls between Rhea (Saturn's moon) and Gaia (Earth). Young Rheans are put through the system to acquire life experience, which makes them mature at a very young age. Thus they are able to contribute to society without waiting to be adults. The system however has a more notorious use - to imprison convicts on Gaia for an entire lifetime, with their Rhean memories locked until their sentence is completed. Lynx has spent 33 full incarnations for a crime he committed. However, his last incarnation goes wrong and he wakes up on Rhea with a crystal surgically fused in his forehead which effectively locks his memory on his last incarnation on Gaia. As Lynx navigates this new world, he discovers that Rheans can manipulate Dark Energy (Dark’En) to defy most of the laws of science, which would have been considered magic back on Gaia. Because of the crystal, he cannot use Dark’en on his own. However, Lynx is a very powerful individual, having served in the Gold Defenders as a General before his imprisonment. Given his past crime and his terrifying dormant power, he is constantly targeted by the Defenders, assassins and the Royals. Friends who wishes to destroy the Incanarium system joins him along the way. They develop strong bonds, despite the risk that the protagonist could regain his memories at any moment and turn against them. Lynx embarks on a lengthy journey to understand his own power, unlock the mysteries of the Incarnarium and ultimately find a way back to his wife and his old life.